“The spirit of our endeavour is, To strive, to seek, to find and not to yield” 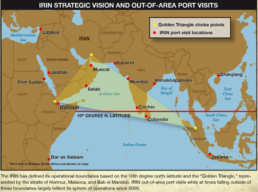 Iran is strengthening its maritime power by developing or opening new naval military bases, logically following a strategy aimed at bypassing the Hormuz Strait chokepoint, thus projecting capabilities in the Arabian Sea and the Western Indian Ocean and changing the perspective on its own geostrategic limitations determined by a closed sea basin (see ONI map).

The Sepah Navy commander (Islamic Revolutionary Guards Corps Navy), Alireza Tangsiri, announced the opening of a permanent military base in the Indian Ocean by March 2021. According to Tangsiri, the naval base would increase security in the Gulf of Oman, protecting fishing and industrial shipping from piracy and some foreign warships [Mehr News Agency, “IRGC Navy to establish permanent base in Indian Ocean: navy cmdr.”, June 22, 2020; MEMO, “Iran to set up new base in Indian Ocean”, June 23, 2020]. No details were offered regarding the place [N.o.E. according to previous Sepah Navy commanders’ statements and current information on Iranian political influence the most logical site could be in Sri Lanka, while Indonesia would be less probable].

In the meantime, the 24 September 2020, Iran opened a naval base near the port of Sirik (Hormuzgan), east of the Hormuz Strait (see below, DIA map). After six years of construction, the Shaheed Rahbari base was inaugurated in the presence of General Hossein Salami, the commander of the Revolutionary Guard (IRGC), with the purpose of establishing “full control” on the Strait [Patrick Sykes, “Iran’s Revolutionary Guard opens new base on Hormuz Strait”, Bloomberg, September 24, 2020]. 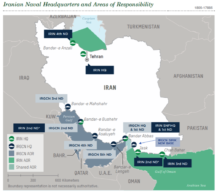 The regular armed forces (Artesh) are traditionally focused on the Caspian Sea and the Indian Ocean, while the IRGC is responsible for operations in the Gulf: but in the case of the critical Hormuz Strait, both are in charge. The Iranian Navy is now strengthening its naval positioning: it has just restructured two naval headquarters at Bandar-e Abbas, announcing the fast development of the bases in Bandar-e Jask and Chabahar, both at the east end of the Hormuz strait.

The Iranian “beyond Hormuz” strategy has also an energy component. As announced by President Hassan Rouhani in June 2020, Tehran plans to build a 1.000 km oil pipeline linking Bushehr to Bandar-e Jask by March 2021. Currently, about 90% of Iran’s oil export passes through the Hormuz Strait via Bushehr. Circumventing Hormuz is a way to make the evergreen threat of a Strait closure or interdiction by Tehran more consistent [Nicholas Carl, “The growing Iranian threat around the Strait of Hormuz”, The Critical Threats Project-AEI, September 22, 2020], since this would harm less Tehran (but not Iraq) than it would be today. However, the projection towards the Indian Ocean mirrors the reality of Iran’s growing connection with Asian markets, and the expanding comprehensive partnership with China.

Before the Iranian choice, the “beyond Hormuz” strategy was already a visible trend in the region, as previously shown by the neighbouring United Arab Emirates (port and energy investments in the Emirate of Fujairah) and Saudi Arabia (with a military presence in Yemen’s Mahra governorate since 2017 and an ongoing project to rehabilitate the port of Nishtun, started in 2019). The rising appeal of Oman’s port facilities also confirms this strategic direction.

But the Gulf powers’ out-of-bottleneck strategy has a hidden risk: bringing the geopolitical and asymmetric battle directly into the Western Indian Ocean, thus forcing Asian giants to assume greater responsibilities, or even to take sides between contenders.

Associate Research Fellow at the Italian Institute for International Political Studies (ISPI), Teaching Assistant at the Catholic University of Milan and Adjunct Professor at ASERI.

Oman’s Financial Troubles and the Geopolitics of Aid

Qatar Steps Up Political Efforts in Libya and Mali

Space, Defence and Nuclear Energy: the UAE Bets on Industrialization

Tracing Maritime Geopolitics in “South Arabia” and Beyond